Getting my head round it, tweaking and more. Well so I haven’t killed myself and haven’t got a ticket, which is quite an achievement with 600hp/tonne on tap. Admittedly I’m practising a lot of self restraint, so much so a drive to Silverdale and back netted a max rpm of 5700rpm. No matter which way you look at it, a minor slip on the throttle and you’re at license loosing speeds in a second or so. For reference in 2nd gear it takes probably 2 seconds to get from 40-100 or so.

Main shakedown issues is it’s too cold on the open road and charging a little too low. For the former I’ve learned how to get into the PCLink software and tune the ECU. On the right track, starting to get things under control – it’s pretty rad looking over in the passenger seat seeing live figures from the ECU. Being a software guy I have trust issues so every time I press “store to ecu” hoping the car doesn’t conk out! Basically as soon as you get speed on it overcools, it’s a matter of finding what pulse width that the electric pump will actually keep the engine on temp. You can see the line graph showing it rising up when the engines idling, and then dropping underway.

For charging I’ve ordered a smaller diameter alternator pulley which should sort that one out. I also got a little CTek trickle charger that works with AGM’s to keep it topped up in between giving it the jandal. After perusing Caterham forums it seems the R300/400/500’s also have a similar alternator – the only thing that would fit and handle high revs, but not so willing to charge at low revs.

Finally a track day is booked for the 29th. Safe to say I’m nervous as hell. Now fully kitted out with helmet, HANS, gloves, etc etc. FYI for anyone considering it (not that I’m authority so take this with a grain of salt) you can now get HANS devices for $650 or so. Immediately once you do up the clips and get buckled in you see how they work. They do limit neck movement quite considerably. 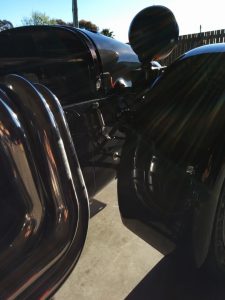