The first drive. Crazy. We’re up and running… after much di-king around with the ECU and Dash (they weren’t talking to each other over the CAN bus) only to find out that there was a dodgy pin the AIM Dash connector, the boys managed to get the car ready to drive on the road.

It was only running in the cold program mode on the ECU as water temps weren’t going about 75degrees or so. So it had a 5k rev limit and probably runs rich. But even then holy s!!!t. Knowing from the dyno at 5k it’s making 200hp, 7.6k it’s making 330hp – and peak torque is around 7k. This thing is a beast. Really good news it was running too cold, shows cooling is not going to be a problem.

I only got to drive it round the driveway, had to entrust myself to that dude with the long hair on the road (insurance..) Was showing Erin the GoPro video and I got “are you two giggling like school girls?”

It also sounds incredibly angry. If you’ve seen the 620R footage, it sounds *exactly* like that.

Next steps
– Adjust the duty cycle down on the water pump
– Windscreen back on (scuttle had to come off for re-wiring the dash)
– Rear boot cover made
– Brakes bedded in
– Minor little fix ups on trim
– Adjust the dash
– New speed sensor (one broke, damn)
– Then certification can start. 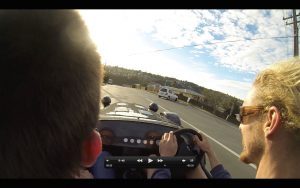 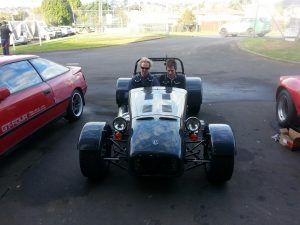